Hola!  I hope that eveyone is having a great spring.  Spring has FINALLY sprung in our little corner of the world, and I’ve got to say that I am loving it! I have been cooking and baking up a storm, so I have a ton of recipes to share.  Let’s get right to it. 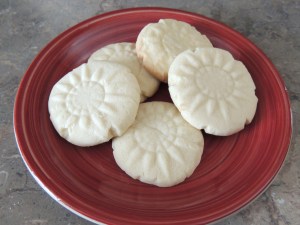 The first recipe was for shortbread spool cookies.  I have loved these cookies since I was a kid.  My Aunt Pat has made them for years, and I absolutely adore them.  They are melt in your mouth yummy! I’ve had the recipe since I did my “Cookie of the Week” blog, but had never made these little gems until now.  YUM!  The recipe is super simple, and I will happily add these cookies to my regular rotation.  Here is a link to a recipe that is similar to my Aunt Pat’s: http://allrecipes.com/Recipe/Heavenly-Shortbread/Detail.aspx?evt19=1

The next recipe was for chocolate coconut bars.  This is Martha Stweart’s recipe, and I 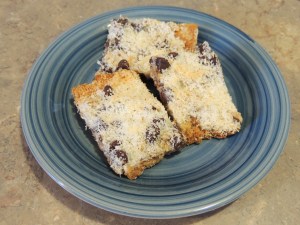 found it on Pinterest.  I love love love chocolate, and I also adore coconut, so when I saw this recipe, I knew it was a done deal. Part of the reason that I love this recipe is that it’s pretty versatile. For example, the recipe calls for pecans, but I was out so I used walnuts.  Also, the crust calls for graham cracker crumbs.  I did have some, but not enough  for the recipe, so I also used vanilla wafers to make up the difference. The resulting bars are delicious! Even Dan who isn’t crazy about coconut liked these.  That said, Ryan wouldn’t eat them.  😦  Here is the link to the recipe I used: http://www.marthastewart.com/313038/chocolate-coconut-bars#slide_17

The next recipe was for creamy garlic shells.  My Victoria absolutely LOVES macaroni and

cheese.  Every time I ask for dinner requests or meal ideas, she responds with “mac and cheese!!”  Ryan doesn’t care for macaroni and cheese, so I knew from the beginning that he was out. This recipe is super easy, and I always have all the necessary ingredients on hand.  I am happy to report that the dish came out great, and my mac and cheese expert was thrilled!  Here is a link to the recipe that I used: http://iowagirleats.com/2013/03/06/creamy-garlic-shells/

Next, I made red velvet Oreo fudge bars.  O.M.G.  These were amaze-balls (that’s my new fave expression…why???  I don’t know ☺) I bought Oreo’s especially to make these bars, and man did I have a heck of a time fighting off the family until I had time to use them. 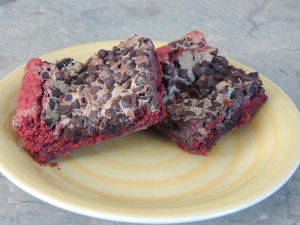 My family LOVES Oreo’s, but I don’t regularly buy them.  I have a really hard time purchasing store bought treats when I bake every week.  Yes I still bake EVERY SINGLE WEEK, yet my crazy family begs for Oreo’s and Poptarts!  Man… can’t a girl get some credit?!?!? I would never choose a store bought treat over a home made one, but I guess you always want what you don’t have. I mean it’s just like the old expression the grass is always greener.  For instance, I bake all the time, but my family craves store bought treats.  My good friend never bakes, but always has store bought treats at home, and her family fights over my homemade goodies.  Notice how I didn’t divulge her name???☺  Side story; my Dad used to own an Italian restaurant, and literally had the finest recipes and ingredients at his fingertips. Think all different sorts of pasta dishes, pizza, cheese…YUM right?  Yes yum, but despite all the yumminess that literally surrounded him in that kitchen, he craved Cap’n Crunch! What?!?!?!?   Anyway, I made these bars and they were delicious! I would definitely make them again, even if it means hiding the Oreo’s from my family.  Here is the link to the recipe that I used: http://insidebrucrewlife.com/2014/01/red-velvet-oreo-fudge-bars/#comment-161069

The next two recipes I made the same night for dinner…sweet potato, corn, and black bean

hash, and crunchy black bean tacos. We were having a mex-fest, and I really wanted to try a couple new recipes.  I found both of these on Pinterest, and I would totally make them again.  The hash was a meal all by itself.  I love love love sweet potatoes used in savory dishes, but only have a handful of recipes. After making and eating this recipe, I will happily add it to the rotation.   It was warm and spicy, and delicious.  You could just prepare the hash and be full and satisfied, but I wanted to try the taco recipe too.  I am so glad that I did, because the tacos were amaze-balls! I LOVED them, and actually made them again later in the week.  They were a cinch to prepare, and I always have all the ingredients.  Needless to say, Ryan wouldn’t even try the mex-fest…sigh.  Oh well…more for me 🙂  Here are the links to the recipes I used: http://www.eatingwell.com/recipes/sweet_potato_corn_black_bean_hash.html   and    http://www.endlesssimmer.com/2012/04/04/cornerstone-cooking-crunchy-black-bean-tacos/#more-33746

The next recipe I made was to celebrate St. Patty’s Day.  Leprechaun rainbow cupcakes equal so much fun.  I had to buy Rolos especially as I never have any in the house, and the

family didn’t seem to mind eating the left overs. 😉  Other than the Rolos, I always have the ingredients on hand, including the edible rainbows aka Airhead Xtremes.  Oh man, my mouth tingles just typing that.  I love love love those sour strips…they are so good.  I tried one after Victoria purchased a pack at her school store a few years ago.  I’d never eaten one before that, but now I am hooked.  If you haven’t ever had the pleasure, pick up a pack. I seriously doubt that you’ll be sorry.  If you are however, I will gladly take the left overs off your hands. 🙂 Anyway I wanted to make a fun treat for St. Patty’s day, and I decided on these cupcakes. The recipe is super easy, and everyone had fun eating the cupcakes.  Here is the link to the recipe:http://www.housewifeeclectic.com/2014/02/leprechaun-rainbow-cupcakes.html

The last recipe I tried was pumpkin kibbeh. Okay, so I’d never had pumpkin kibbeh until last year, and it was by accident.  Here’s the story.  My Sito Georgia and my Sito Vicky (my Grandmother and Great Grandmother…also Victoria’s namesake) used to make meat free kibbeh balls every year during lent.  The recipe was called kibbeh trawheb…I have no idea if that is how the recipe is actually spelled.  Growing up, I just called them lent balls.  They were little kibbeh balls that were stuffed with a mixture of spinach, chick peas, onions, and spices.  I remember being so excited for lent, because I knew that meant I’d get to eat my Sitos’ lent kibbeh balls.  I LOVED them.  Sadly, my Sito Georgia passed away in 2007. Fortunately a few years prior, I had her dictate the recipe to me.  Unfortunately, I never tried to actually make the lent balls until last year.  Tragically it was an epic fail…I mean a complete culinary flop. The stuffing was amaze-balls, but the kibbeh balls were bad.  They came out tough, bland, and way too “floury.”  Since I had no Sito to consult, I consulted my two Lebanese cook books.  Nothing even remotely close was in either one of them.  Next, I searched the internet for the recipe, and again found nothing.  Since I could not properly spell the recipe’s name, I was handicapped from the beginning.  I did find all sorts of meatless kibbeh ball recipes, but none that matched the recipe my Sito had given me. Next I took to the phones, and called a few Middle Eastern restaurants and supply stores. No one had heard of kibbeh trawheb. Whist at my Dad’s one day, I decided to make one last call.  I picked up the phone and dialed Emily’s Delicatessen.  It is a Lebanese restaurant/bakery/deli/store, and it rocks.  I asked if they carried lent kibbeh, and THEY DID!!

WHOO HOO!! I got right in my car, and drove over there immediately.  I was euphoric during the 10 minute drive to Emily’s from my Dad’s.  I hadn’t eaten a lent kibbeh ball in years.  I was so excited I could almost taste it.  Upon arrival I discovered that their lent kibbeh was made from pumpkin.  Sigh…I was deflated.  I talked to the owner, and asked him about kibbeh trawheb, and he looked at me like I was nuts.  It was then that I felt my Sito’s loss all over again.  When she departed this earth, that amazing recipe went with her. Even though I had written it down years before, it was useless without her knowledge and 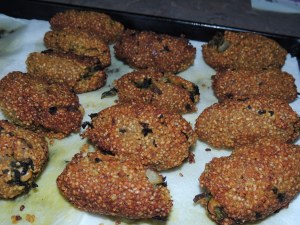 guidance. Reluctantly, I purchased a dozen kibbeh balls and went back to my Dad’s.  To the good, we did like the kibbeh balls, but they were not the same as Sito’s. After I licked my wounds for a bit, I decided to search the internet for pumpkin kibbeh, and found a ton of recipes.  I selected one that was the most similar to my Sito’s recipe and saved it to my computer.  This year during lent, I decided to try again.  This go round, I fused my Sito’s recipe with the pumpkin kibbeh recipe I found on-line last year, and EUREKA! We have lent balls!!  Admittedly, they are not exactly the same.  That said, they are pretty close.  I absolutely LOVE this recipe, and I know my Sito would be proud. Here is the link to the recipe I found on-line:http://www.npr.org/2011/11/16/142306863/pumpkin-kibbeh I could have included another 7 or 8 recipes in this post.  For the first time ever, I hosted an Easter brunch, and made all new recipes.  I think in the next few weeks, I will  post specifically about those yummy brunch recipes.  They got rave reviews from everyone, and I am excited to share them with you …stay tuned!  Until then I hope you try the recipes in this post…they were amaze-balls!  Enjoy! ♥♥

My sweet Sito Georgia and me

I am not professionally trained in any way shape or form, BUT I come from a long line of really great cooks. I learned mostly by watching my parents and grandparents, and then replicating what they did. I love love love to cook and bake, and I love to share what I make with "my people."
View all posts by THE cookie mama →
This entry was posted in Brownies, Cakes, Candies, Chocolate, Cookies, Lebanese, Savory, Uncategorized and tagged black bean, chocolate, coconut, cookies, corn, crunchy, garlic, hash, home made, kibbee, kibbeh, kibbeh balls, Lebanese, lent, love, mac and cheese, Oreo, pumpkin, recipe, red velvet, rolo, shells, shortbread, sito, sweet potato, tacos, yum. Bookmark the permalink.