All Things Zucchini…made with l♥ve by the Cookie Mama.

Hello!  Wow, it has been a LONG time since I posted.  We had a crazy busy summer, chock full of fun and food.  My garden went crazy, and at times I had more veggies than I knew what to do with…especially zucchini.  Since I had soooo much zucchini, I decided to dedicate a whole post to the new zucchini dishes I made over the summer.  Here we go…

The first recipe I made was zucchini patties.  They are like zucchini pancakes…YUM.

I got this recipe from my friend Michelle Oke years ago, and I’ve been using it ever since.  My family minus Ryan of course, loves these patties, and we had them multiple over the summer.  I also froze some shredded zucchini, so in the middle of the winter, we can still have a taste of summer, by enjoying these patties.  Here is a link to a recipe that is similar to t he one Michelle gave me: http://allrecipes.com/recipe/zucchini-patties/  We like to eat them with couscous or a big salad.

The next zucchini recipe I made was pizza margherita

with a zucchini crust.  So I’ve had this recipe in my back pocket for a long time, and finally had the chance to experiment with it.  It was relatively simple to make, and really yummy.  The only issue is that the recipe only yields two single serving size crusts.  Next time, I would definitely double or triple the recipe as we love left overs in our house, and this recipe didn’t make enough.  I’ve heard that there is a similar recipe in which you use cauliflower to make the crust, but my family doesn’t care for cauliflower, so I will stick to zucchini.  Here is the link to the recipe that I used: http://www.kalynskitchen.com/2012/08/zucchini-crust-pizza-margherita.html

Next, I tried two recipes for the same dinner…zucchini pizzas and parmesan garlic quinoa, or as my Victoria named the meal “…fake pizza, and fake mac and cheese.” 😉  I happen to love both of these recipes, and have made them in the past.  They are super simple, and really healthy.  The flavors were great together, and it was the perfect dinner for a hot summer night.  Here are the links to both of the  recipes: http://beautyandbeard.blogspot.com/2013/04/parmesan-garlic-quinoa-youll-never-eat.html   and   http://www.whatmegansmaking.com/2013/08/zucchini-pizza-bites.html

zucchini…chocolate chip zucchini bread, and frosted zucchini brownies.  Let me preface by saying that Ryan, the pickiest of eaters, enjoyed both of these treats.  That said, he had no idea that there was zucchini in either recipe.  Sometimes tweaking the truth is a good thing 😉  Anyway, we gobbled these treats right up.

Both were decadent and 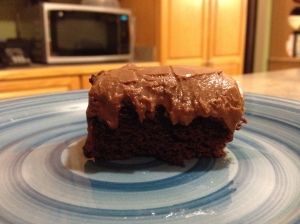 yummy, but if I had to pick a favorite, it would be the brownies. They were delicious and no one could tell that they were actually good for you.  I would definitely make both of these recipes again.  Here are the the links to the recipes that I  used: http://www.somewhatsimple.com/chocolate-chocolate-chip-zucchini-bread/    and   http://mommyimhungry.blogspot.com/2010/11/frosted-zucchini-brownies.html

The next recipe I experimented with was for zucchini cheddar bread.

I love love love homemade bread, but honestly don’t make it very often.  This bread was good but my family gave it a B+.  We grade all the recipes that I try, and rarely do we give anything lower than an A-.  I think the issue was the texture.  This bread has a cornbread like texture.  I do like cornbread, but was wanting a less crumbly consistency when I made this recipe.  The flavors were good,  but next time I’d add more green onions and more cheese. We used the bread mostly for breakfast.  I ate it in the morning with an egg on top, and it was pretty good.  My Dad tried it, and he really enjoyed it too.  I really think the B+ stemmed from the fact that we expecting something entirely different.  Here is the link to the recipe that I used: http://weelicious.com/2012/07/05/zucchini-cheddar-bread/ 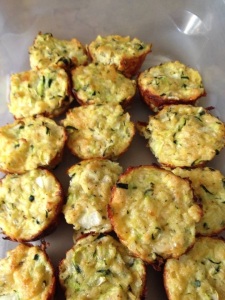 The next recipe was for zucchini bites.  This is another recipe that I’ve had for a long time, but never got around to making. With the abundance of zucchini I had, I decided to try all the zucchini recipes I had in my culinary arsenal.  These were yummy, and I would definitely make them again.  Next time though, I’d bake them a bit longer as I’d prefer a crispier texture. Here is the link to the recipe that I used:http://www.stockpilingmoms.com/2012/06/pinterest-daily-pin-zucchini-bites/

The next recipe featuring

my garden veggies was vegetable tian.  I saw this recipe on Pinterest, and it looked so pretty,  I knew I had to give it a try.  I was super happy to have grown the zucchini, tomatoes, and yellow squash used in this dish.  It reminded me of ratatouille minus the eggplant.  It was really good, and it allowed me to use a lot of veggies at once. I served it with couscous.  I’d definitely make this again.  Here is the link to the recipe that I used: http://theblondcook.com/2013/07/vegetable-tian/

The last recipe featuring my beloved zucchini was frosted butterscotch zucchini bars.  These were awesome.  I have been really digging butterscotch

lately so these were right up my alley.  When I was a kid butterscotch pudding was my favorite.  There was a restaurant called Marco’s where my family went a lot.  We had parties and wedding showers there, as well as the occasional dinner out.  I also remember going with my Grandma on a few occasions to clean Marco’s as a side job, and there was always butterscotch pudding in the display case.  When she was done before we’d leave, I’d always get to sit at the bar and eat a “scutterbatch” pudding.  Apparently I couldn’t pronounce it. 🙂  Also, my Grandfather always had those butterscotch hard candies in the yellow wrappers, and I used to love them.  Anyway, I have rekindled my love affair with butterscotch lately, and these bar cookies feature the flavor quite nicely.  I’d definitely make these again.  Here is the link to the recipe that I used: http://insidebrucrewlife.com/2014/08/frosted-butterscotch-zucchini-bars/#_a5y_p=2151037

I definitely plan to grow more zucchini next summer as it is one of my favorite vegetables. It is extremely versatile and pretty easy to grow.  Next summer though, I want to try fried zucchini blossoms.  I’ve seen them on a few cooking shows, and really want to try them. My only concern is that if I use the blossoms in recipes, they obviously won’t grow into actual zucchini 😦  Maybe next summer, I’ll  have to dedicate one plant to just the blossoms…we will see.

I hope you enjoyed my “zucchini-palooza.” I have a ton more recipes from the summer that I want to share with you.  Until then, try a few of these recipes…you won’t be sorry.  Enjoy!  ♥ 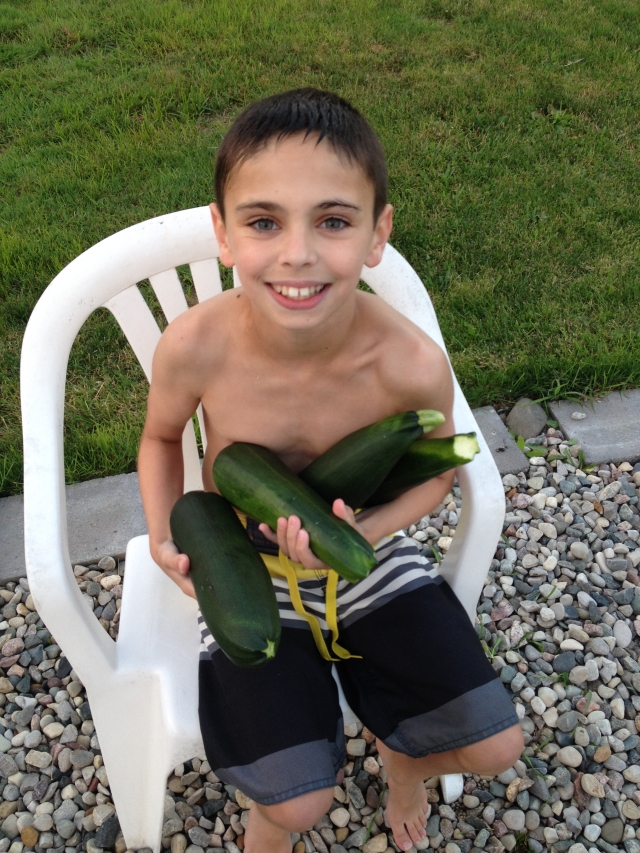 Even though my Ryan wouldn’t knowingly eat zucchini, he sure liked to help me pick it. 🙂

I am not professionally trained in any way shape or form, BUT I come from a long line of really great cooks. I learned mostly by watching my parents and grandparents, and then replicating what they did. I love love love to cook and bake, and I love to share what I make with "my people."
View all posts by THE cookie mama →
This entry was posted in Bread / Muffins, Brownies, Cakes, Cookies, Italian, Savory and tagged almonds, bar cookies, bars, bread, brownies, butterscotch, butterscotch oats, cheddar, chocolate, cookies, couscous, garden, healthy, home made, love, margherita, oatmeal, oats, parmesan, pizza, quinoa, scratch, summer, sweets, tian, vegetable, zucchini. Bookmark the permalink.